Some people take outfit of the day photos by the beach. Jennifer Lopez went one step further, doing a whole swimsuit photo shoot during her Capri, Italy, trip that paparazzi appeared to capture on Monday. Lopez was seen lounging in a belted one-piece swimsuit from WeWoreWhat, at one point with fruit alongside her. This is European summer vacation content at its finest, folks. 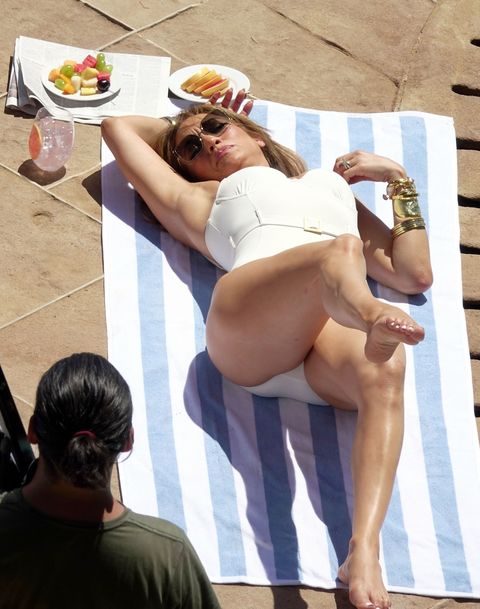 Lopez started her Euro trip in Paris with her new husband Ben Affleck. The two made out in multiple public spots and generally appeared smitten on the short but sweet honeymoon-esque trip with their kids.

A source told People then that the couple spent more than two hours cuddling and kissing on a Paris park bench around 7:30 A.M. one particularly lovey-dovey Friday. “They were like two teens on a park bench—very loving, very attentive,” the source said. “There weren’t a lot of people that time of the morning, and they weren’t distracted. It was just them.”

“Whether it was holding hands, a caress, touching one another on the back … they never let go of one another,” an observer told the outlet. “They were like two bees stuck in honey.”

Lopez has only made one public comment on Affleck since their wedding, sharing details about the Las Vegas ceremony in her On the JLo newsletter.

We did it. Love is beautiful. Love is kind. And it turns out love is patient. Twenty years patient.

Exactly what we wanted. Last night we flew to Vegas, stood in line for a license with four other couples, all making the same journey to the wedding capital of the world. Behind us two men held hands and held each other. In front of us, a young couple who made the three hour drive from Victorville on their daughter’s second birthday—all of us wanting the same thing— for the world to recognize us as partners and to declare our love to the world through the ancient and nearly universal symbol of marriage.

We barely made it to the little white wedding chapel by midnight. They graciously stayed open late a few minutes, let us take pictures in a pink Cadillac convertible, evidently once used by the king himself (but if we wanted Elvis himself to show, that cost extra and he was in bed).

So with the best witnesses you could ever imagine, a dress from an old movie and a jacket from Ben’s closet, we read our own vows in the little chapel and gave one another the rings we’ll wear for the rest of our lives. They even had Bluetooth for a (short) march down the aisle. But in the end it was the best possible wedding we could have imagined. One we dreamed of long ago and one made real (in the eyes of the state, Las Vegas, a pink convertible and one another) at very, very long last.

When love is real, the only thing that matters in marriage is one another and the promise we make to love, care, understand, be patient, loving and good to one another. We had that. And so much more. Best night of our lives. Thank you to the Little White Wedding chapel for letting me use the break room to change while Ben changed in the men’s room.

They were right when they said, “all you need is love”. We are so grateful to have that in abundance, a new wonderful family of five amazing children and a life that we have never had more reason to look forward to. Stick around long enough and maybe you’ll find the best moment of your life in a drive through in Las Vegas at twelve thirty in the morning in the tunnel of love drive through, with your kids and the one you’ll spend forever with. Love is a great thing, maybe the best of things—and worth waiting for.

Alyssa Bailey is the senior news and strategy editor at ELLE.com, where she oversees coverage of celebrities and royals (particularly Meghan Markle and Kate Middleton). She previously held positions at InStyle and Cosmopolitan. When she’s not working, she loves running around Central Park, making people take #ootd pics of her, and exploring New York City.

The Great British Bake Off Faces Backlash Over Its Mexican Week

The Most GINORMOUS Taylor Swift News!!!!

Michelle Yeoh Weighs In On The Witcher’s Henry Cavill Recasting

15 Incredible Hikes in Albania (For All Levels)

Selena Gomez Wears a Wedding Dress to the Emmys | Photos

What Keeps Us Up at Midnight