Nona Willis Aronowitz doesn’t proclaim to have all of the answers. The daughter of feminist and cultural critic Ellen Willis and labor activist and professor Stanley Aronowitz, Willis Aronowitz grew up in New York City with loving, politically-minded parents. But as her marriage unraveled and her father’s health declined before his death in 2021, Willis-Aronowitz turned again to the writings of her mother, who died when she was 22 years old. Her book Bad Sex: Truth, Pleasure, and An Unfinished Revolution, which is out today, is the culmination of Nona’s personal and academic journey through marital and extramarital sex, rebound and hookup sex, and an exploration of desire and sexual politics in the post-Donald Trump, post-#MeToo era. She spoke with ELLE.com about the radical nature of seeking sexual happiness in a post-Roe v. Wade world, the privileges of pairing off, and much more.

Take me back to 2016, when your book opens. Given Trump’s presidency and the massive disappointment surrounding his win, did you know that this was the moment to write Bad Sex?

2016 was a really momentous year, and I’m not just talking about the 2016 election, I think people forget that the months leading up to the election were really intense and crazy. I was also an editor for a political website, Splinter, RIP. So it made it so much more immediate and visceral. Meanwhile, my personal life was totally falling apart. I broke it off with my husband. Months before that, I was having an affair. My dad was barely a year out from having a massive stroke.

I don’t think I started thinking about this book until I went on a road trip across Texas in 2017. I had a huge amount of time to think about what the last year and a half had been like for me and it became clear to me that I had had a very politically and personally significant year, so I think that’s really when I started to think about the book. Then I took a buyout from Splinter in 2018 and it was clear that I was going to do a big project like this.

Let’s unpack the title. When I think of “bad sex,” I think of unmet wants or needs but it’s so much more complex than that. Can you talk a bit about how you came up with the title?

I have to give the credit to my agent, Samantha Shea, who came up with this provisional title that ended up being the actual title because it was so perfect. I think bad sex can be literal in this book. I do talk about sex that is bad, whether it’s because of the reasons you said, people aren’t listening to you or noticing that you’re not having a good time. But I think what I mean by bad sex is more, what are the factors that make sex or relationships or intimacy go bad? What are the roadblocks to sexual happiness and sexual liberation?

Even if it’s supposedly not emotional, every sex act has meaning meaning behind it.

It’s really hard to separate the two, but it’s not just about the act. For a long time, I didn’t understand as a teen and in my early twenties that most sex for sex’s sake, with absolutely no meaning behind it, even that stuff has meaning. There’s a reason why you’re seeking that kind of sex out. What else is going on in your life that you want no strings attached sex? What is it about that sex that you find hot? Even if it’s supposedly not emotional, every sex act has meaning meaning behind it. I kept the title “Bad Sex” because there are all kinds of factors that mess with our ability to be sexually happy.

You write a lot about your marriage to Aaron. It’s very easy to put people into neat categories, but he defied that. It’s what I call “the sticky thing about desire.” Can you talk about that?

The first two chapters of this book are sort of a divorce memoir. Divorce or breakups can be a locus of liberation. But I didn’t have that, that neat narrative, like you said. I guess I did cheat on him but I find that to be more of a symptom of my discontent rather than the reason we broke up. He never even really knew about it. I had to tell him retrospectively, ‘cause I was like, there’s this thing in the book you should know. But it’s not like that was the reason we broke up. The thing about desire is that it’s not always a reaction to something terrible. It’s just a reaction to something different, something that’s not quite right. That’s just so much harder to act upon or recognize because there are so many strong cultural messages that still tell even somebody like me, you shouldn’t give up somebody who’s so committed to you because dating is really bad, which I agree with, you know, it’s not easy. But also you get all these privileges when you’re partnered, and I was loath to admit that I really did not want to let them go.

This also ties into the conflict between politics and praxis, and you bring up many examples, like one feminist who argued for polyamory but then got jealous of a lover for having another partner. 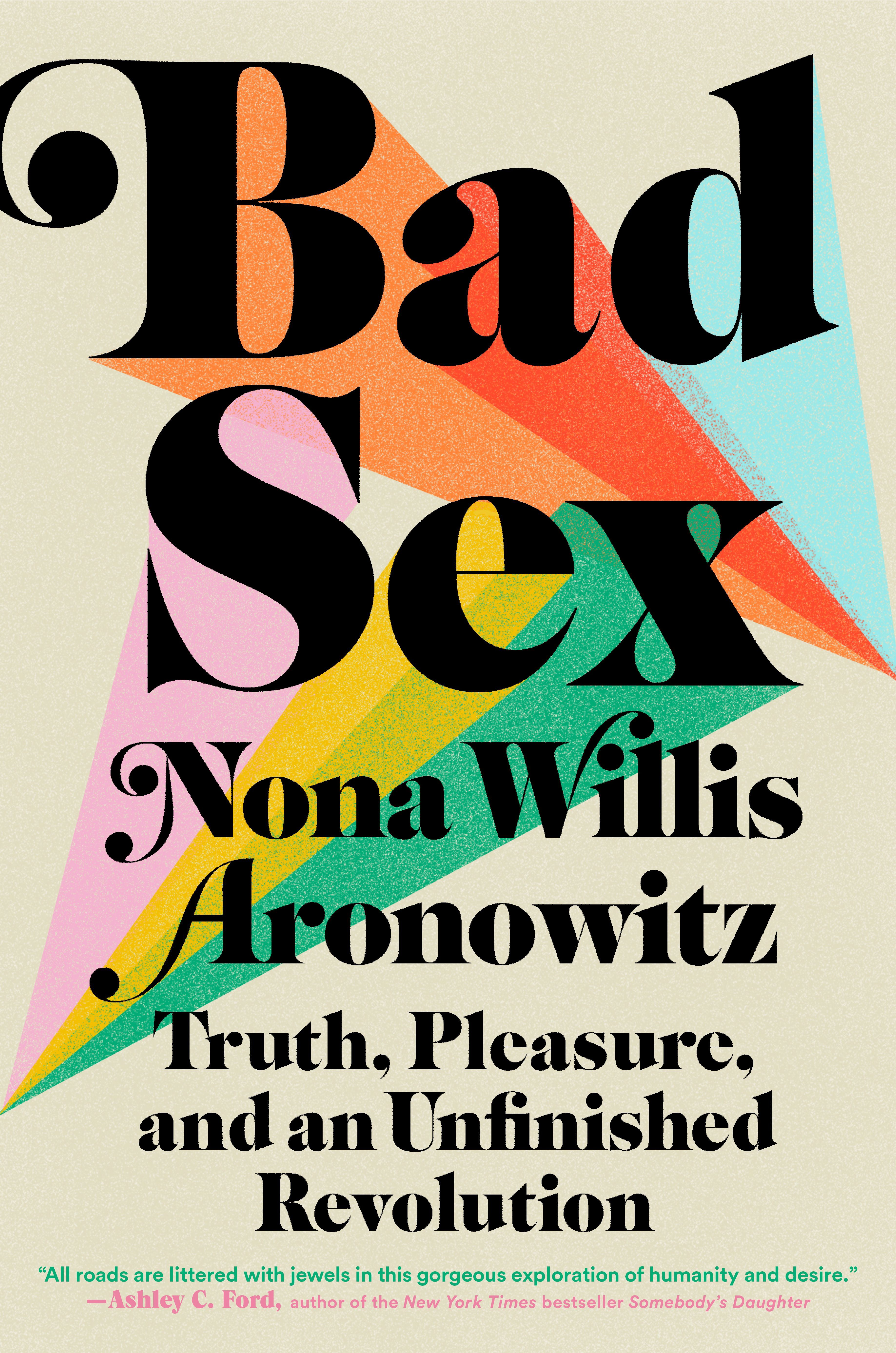 Emma Goldman. She was so staunchly leftist, and so kind of cut and dry, and that’s what made her such a successful activist. But she just could not give herself grace when it came to her personal life. She fell in love and felt a huge amount of jealousy even though she was advocating for free love.

When she put together her very exhaustive autobiography, she did not disclose all of that pain. I think her work is worse for it because I think that’s a huge part of the discussion of trying to create a better world. It’s like, you also have to admit that certain visceral emotions will conflict with tidy politics.

What do you do about that? I think if we don’t talk about that, then it comes as a surprise and then creates shame. At least that’s what happened to me. I think when my feelings started to conflict with my politics, I was embarrassed to admit it to some of my more strident, progressive friends. I felt sheepish about maybe being more traditional, stuck in a different time or being less self-assured than I had claimed to be. It created a huge amount of silence around these issues and that’s counterproductive.

Your parents are well-known for their activism, and you devote a good portion in your book to exploring their archives, especially your mother’s. What was that like?

It was a transformative experience for me because my mother is the type of person who did have a certain amount of vulnerability in her writing and always had sort of a memoiristic way of viewing politics, similarly to this book. But then I discovered, when I read her diaries and talked to people who were close to her, that there was another layer of vulnerability that did not figure into any of that writing that is important to talk about, too. My mother had kind of a very measured, ultimately optimistic way of parsing things out and being very vulnerable and heartfelt.

But as I discovered, even that was not the full picture. It was actually revelatory to know that even the ambivalence she expressed in her writing was not the full story. I just found myself wanting, so, so, so badly to talk to her about my relationship with Aaron but I couldn’t. So I had to do it through her writing, not only her public writing but her private writing.

There is no sexual liberation without abortion rights and bodily autonomy. If you can’t control your reproduction, you are not sexually liberated.

You write so vividly about your mother’s relationships and even her abortion. Were there times where you asked yourself if you should include it?

I thought about that. I mean, she didn’t really write about her abortion. She mentioned it in passing one time. But I think I treated it with enough care and nuance that she would’ve been okay with it. I don’t know if I would’ve been able to include it if she were still alive. She probably would’ve said no, she was a pretty private person. She had this big filing cabinet when she was alive that had all of her clips from The Village Voice, Rolling Stone, The New Yorker. In those same drawers, she also kept diaristic writing. I feel like she was deliberately keeping an archive of her stuff for posterity.

Speaking of abortion, this book is coming out just a few short months after Roe v. Wade was overturned. You couldn’t plan for it, but with all the discussions surrounding sex and reproductive rights, how do you feel about releasing your book in this moment?

I think that a book about sexual pleasure and sexual liberation is more important than ever. I think there is no sexual liberation without abortion rights and bodily autonomy. They’re all connected. If you can’t control your reproduction, you are not sexually liberated. I think that’s a very, very important point that we need to hold onto as we talk about the minutiae of Roe v. Wade. It makes sense right now that people are reporting out all of the individual stories of women’s health crises. But I think broadly, we also have to think about what this means for sexual politics and how it’s connected to pleasure and happiness. It’s a real assault on freedom, and freedom is very connected to happiness.

This interview has been condensed and edited for clarity.

Morgan Jerkins is the author of This Will Be My Undoing.

Mom Pregnant With Son’s Child At 56 Years Old – Here’s The Amazing Reason Why!

Cardi B and Quavo Honor Takeoff With Moving Tributes After Memorial

Strictly Come Dancing Fans Emotional As Hamza Breaks Down In

The Cloud Computing Market May Finally Be Set To Cool Off