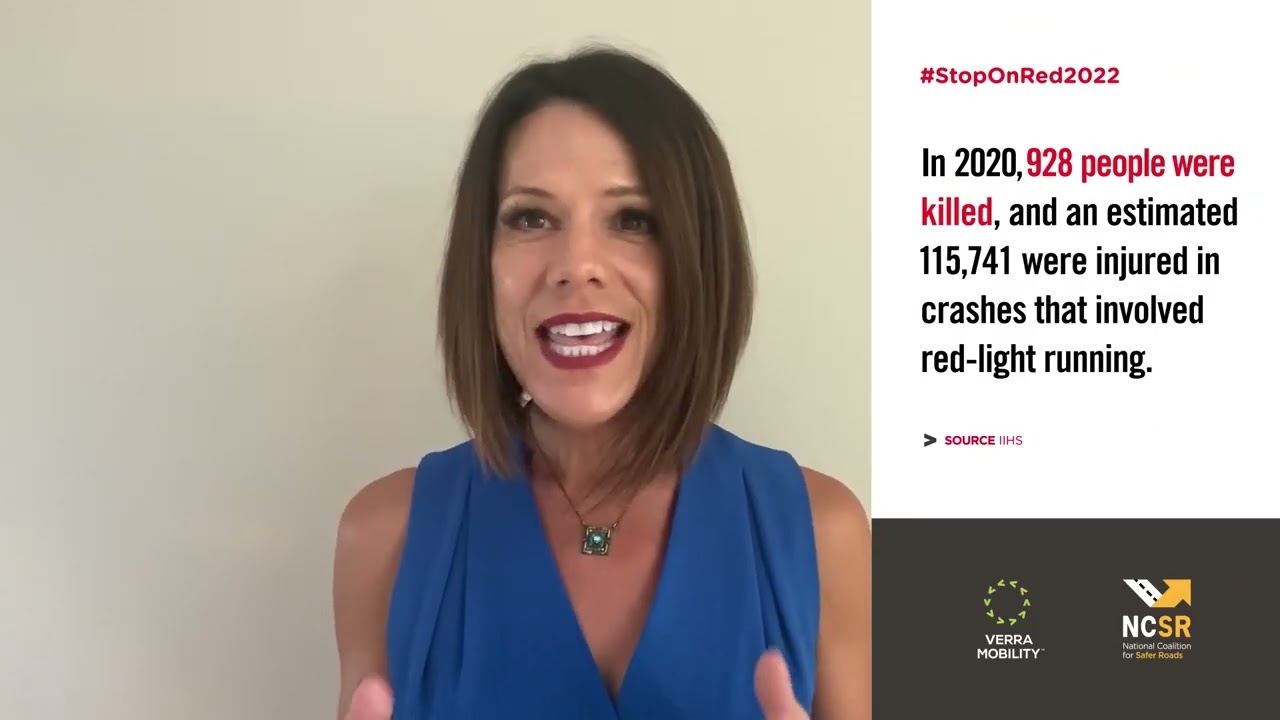 Drivers at the busy intersection of Silver Springs Boulevard and Pine Avenue got an eye-catching reminder Thursday morning to “Always Stop On Red.”

About 20 volunteers wearing bright green vests from several state and local agencies –including uniformed first responders – stood along the two roadways and crossed the roadways at the crosswalks displaying signs that carried the message to always stop at red traffic lights. Drivers honked and waved apparent approval.

The Institute for Highway Safety (iihs.org) says 928 people died nationwide in 2020 as a result of traffic crashes involving red light running and almost 116,000 people were injured.

The Federal Highway Administration set Aug. 7-13 as “National Stop on Red Week” to “educate drivers about the dangers of red-light running and to help reduce the number and severity of traffic crashes,” according to a press release from the Florida Department of Transportation District Five office in DeLand, which served as organizer for Thursday’s event in downtown Ocala.

The two-plus hour “Stop on Red” event in Ocala, which included remarks on safety at a staging area before volunteers hit the hot street, was a joint effort of the FDOT with personnel from their District Five office in DeLand, the Ocala Marion Transportation Planning Organization (TPO) and National Coalition for Safer Roads (ncsrsafety.org), the FDOT press release stated.

A 2021 traffic count available at OcalaMarionTPO.org states the vehicle count on Silver Springs Boulevard just east of Pine Avenue is an average of 32,000 vehicles daily.

Even as the event proceeded, at least two cars were seen clearly running the red light on Silver Springs Boulevard westbound at Pine Avenue.

FDOT is organizing events statewide as part of the national campaign to highlight the importance of obeying traffic signals.

‘No good comes from it’

Melissa Wandall, president of the National Coalition for Safer Roads and founder of the Mark Wandall Foundation, knows all too well the personal toll of running red traffic lights.

“My husband, Mark, 30, was killed by a red-light runner,” Wandall said. That crash was in 2003 on State Road 70 in the Bradenton area. He died three weeks before their child, Madisyn, now 18, was born.

She described her late husband as a “beautiful man” whom his daughter never met due to a moment of careless driving.

“When a red light runner enters your life, no good comes from it,” Wandall said.

She also reminded the volunteers about the importance of watching out for pedestrians.

The “on street outreach” by FDOT will be held next in Brevard County and Wandall will bring her message to that area.

‘Be patient and stop’

MCSO Public Information Officer Lt. Paul Bloom told the volunteers the campaign to educate and raise awareness may “save somebody’s life.” He noted the failure of some drivers to “obey traffic control device(s)” and urged drives to “be patient and stop.”

Russia ‘Unlikely To Break Through’ In Key Donetsk Battleground –

Ocala City Council President Ire Bethea Sr. was among those in attendance Thursday. He said he is pleased to see multiple agencies working together toward safer roads.

Cynthia Barnes, with the Safe Schools department of Marion County Public Schools, remarked on the importance of safe driving and safe practices around school buses.

McDonald said cars should stop for red behind the white line to allow room for pedestrians and drivers should not speed up but begin to stop when a traffic light turns yellow.

“MCFR responds to every vehicle accident. (We see) the injuries and the effect on families,” Fallen-Driggers said.

Tosha Harris, with MCFR administration, and Bita Hooman and Victora Naskale, both with FDOT, stood on Pine Avenue with signs bearing messages about red light safety. Harris said awareness was one reason for the signage campaign.

Sara Shepard, an FDOT contractor, stood along the roadway with a sign. She would like to see drivers “watch (for) pedestrians” as they interact.

FDOT officials emphasize the importance of watching out for and using caution around pedestrians and bicyclists.

Rob Balmes, director of the Ocala/Marion TPO, held a sign during the event. HIs agency coordinates transportation projects including those for highways, bicycles, pedestrian and aviation, according to ocalamariontpo.org.

Balmes said “safety is (the) most critical component,” when planning for growth.

Michelle Weinstein was walking across Pine Avenue with her son, Carsyn, 6, and saw the event participants with signs. She crosses the downtown roadways every day.

Weinstein said drivers sometimes are not looking as they travel in the intersection, and she has had to “put her hand out” like a police officer directing traffic to get across.

Andrew Diaz, 31, who rides a bicycle in the downtown area, said occasionally he sees “a driver frantically run a red light.”

Kim Smith, a volunteer at the event, is with the Brevard County TPO. She joined the Ocala event and will also carry a sign at the upcoming Brevard event.

In spite of the waves and honks of apparent approval, she noted drivers still ran the red.

“I saw three cars run the red light during one (traffic light) cycle. We need this (sign campaign) on every corner,” Smith said.

Half Of Organisations Using Kubernetes In Daily Operations

Listen To This: Wet Hot!

19 Shower Caddy Essentials You Need for Your College Dorm