The Legal Right You Didn’t Know You Have


As Americans, we were raised to believe that the rights granted to us in the United States Constitution are sacred. Yet, in recent years, we have watched the slow, painful erosion of the liberties we so deeply value.

But on March 3, there was some good news: every one of us regained a constitutional right. An estimated 60 million regained it through their employment paperwork. Hundreds of millions more through the apps they’ve downloaded on their phones. In fact, nearly every person who has signed any kind of contract or agreed to any service’s terms and conditions regained a right.

And most don’t know it.

Five years ago, a story broke in The Washington Post that detailed the horrors faced by employees at Sterling Jewelers, the company behind Kay Jewelers and Jared the Galleria of Jewelry. Each account was more disturbing than the last: women forced to attend overnight meetings where they were groped; managers raping employees; and those who refused to turn a blind eye threatened by managers and executives.

How were thousands of cases of sexual harassment and assault at a major corporation covered up for years? Through a well-established culture of corporate silence—and a little-known enforcement tool called forced arbitration.

A forced arbitration clause can be hidden in any contract, agreement, or terms and conditions. In the Sterling cases, it was buried in the paperwork new employees signed when they got their jobs.

This legalese states that, if there is a dispute, both parties will forfeit their right to sue in court, and an arbiter will decide who prevails and who loses. That dispute could include an employee’s attempt to address a culture of sexual harassment at their place of employment.

It seems simple, but the impact of forced arbitration on sexual assault survivors is anything but. The process often happens behind closed doors, with no record of the proceedings. The corporation that drafted the agreement is typically the party that gets to choose the arbiter, so they can stack the deck in their favor. And what the arbiter says goes—there is no appeal if the decision is unjust or the proceedings unfair.

“Across industries, allegation after allegation has revealed how major companies were using this clause to hide top executives’ terrible acts.”

The horror stories didn’t start—or stop—with Sterling either. Across industries, allegation after allegation has revealed how major companies were using this clause to hide top executives’ terrible acts.

But for sexual assault and harassment survivors, all of that has now changed. That story of the thousands who were abused at Sterling inspired the Ending Forced Arbitration for Sexual Assault and Harassment Act. The bill was written and introduced by Congresswoman Bustos and received widespread bipartisan support in both the House and Senate.

Earlier this year, it was signed into law. Now, if a claim of sexual harassment or assault is brought against a company, no arbitration clause applies. If you are a sexual assault or harassment survivor, you can choose the way you want to pursue justice—in court, through an arbitrator, or any other option. It’s your choice. Called “a milestone for the #MeToo movement,” it’s a major step forward for survivors. But it can’t be our final step. 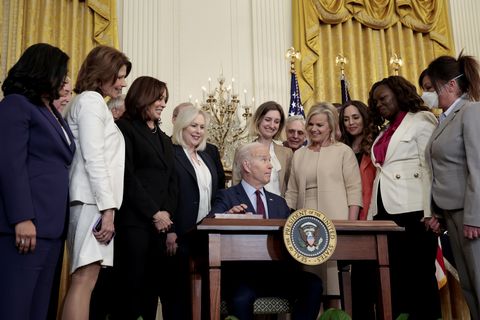 President Joe Biden signs the Ending Forced Arbitration of Sexual Assault and Sexual Harassment Act into law at the White House on March 3.

Recently, Congresswoman Lois Frankel led a bipartisan coalition to introduce the Speak Out Act, a bill that will prohibit the enforcement of pre-dispute nondisclosure agreements, or NDAs, when sexual harassment or sexual assault has been alleged. Currently, the law allows NDAs to prevent employees and consumers from coming forward about allegations of sexual harassment or assault. This silences survivors and perpetuates illegal conduct.

The Speak Out Act is the next legislative step in making sure that no one is able to take away the rights of survivors of sexual assault and harassment. It’s the second part in a one-two punch to dismantle the legal tools that protect that culture of corporate silence. As of now, the bill has passed out of the House Judiciary Committee. Our hope is on its way to the House and Senate Floors next.

And while it’s essential that we continue our legislative work, we must also take steps to educate the people who will be most impacted by these laws. After all, what good is a constitutional protection that no one knows they have?

That’s why the two of us are partnering to launch Silenced No More, a targeted initiative to make sure sexual assault and harassment survivors know their rights.

By conducting extensive outreach to advocates, lawyers, workers’ rights groups, #MeToo activists, those who work on the ground with survivors, and those who are survivors themselves, Silenced No More aims to make sure we can get the word out to those who need to hear it.

Through targeted messaging, this initiative will work to empower sexual assault and harassment survivors with the knowledge that when it comes to pursuing justice, they have a choice. And through the use of digital know-your-rights tools, as well as speaking engagements with organizations around the nation, we hope to help put an end to this deceptive practice for good.

This Is The Laser Kim Kardashian Uses on Her Abs

Check Out the Most Surprising Celeb Transformations of the Week

Kylie Jenner Claps Back After Being Called Out For Breaking Makeup Lab Safety Protocol!

Who Is Dominique Sharpton? Al Sharpton Daughter Is On ‘Claim To Fame’ – Hollywood Life