Emma Stone just welcomed a baby girl with her husband, SNL‘s Dave McCary, on March 13, multiple sources told TMZ. Days after their daughter’s arrival, multiple sources spoke to People about the two’s relationship, calling their marriage “strong and respectful.” A month into Stone and McCary becoming parents, a source updated Us Weekly on how their relationship has changed “in a way they never expected.”

News of Stone and McCary becoming parents arrives less than a year after the couple officially tied the knot in September, according to a source for People. They were spotted wearing wedding bands around Los Angeles, on September 11, a few months after Stone appeared on Reese Witherspoon’s YouTube channel wearing a gold band.

Stone and McCary got engaged in December 2019 after more than two years of dating. The couple is extremely private and has shared little-to-no details about their relationship—save for a few date night photos here and there. However, they announced their engagement via McCary’s Instagram with a surprise ring photo.

Stone’s husband is extremely accomplished and has made a name for himself in the business behind the camera. Here, everything we know about McCary as he and Stone settle into parenthood.

According to People, McCary joined SNL alongside cast members Kyle Mooney and Beck Bennett during the 39th season in 2013. He’s a writer, segment director, and co-founded a comedy troupe called Good Neighbor with Mooney, Bennett, and Nick Rutherford, per People. In fact, if you peep McCary’s non-engagement ring posts, you’ll see quite a bit of Mooney.

He proposed to Emma Stone at the SNL offices.

Stone and McCary reportedly got engaged at the Saturday Night Live offices in New York City, per a Page Six source. “Dave proposed at the offices where they first met at [NBC’s Manhattan HQ] 30 Rock,” the insider said. “No one was there and by all accounts, it was very romantic.”

McCary broke the news of his engagement to Stone on Instagram in 2019. He captioned a photo of the two smiling while she held up her hand with the engagement ring, ” “💕.”

Stone and McCary welcomed their first baby girl on March 13, 2021.

Stone never personally confirmed her pregnancy, but the actress was last photographed out days before she gave birth on March 5. TMZ broke news that the couple welcomed their first child on Saturday, March 13 in the Los Angeles area. People reported days later that the Stone gave birth to a baby girl. The couple hasn’t revealed the name of their daughter yet.

Stone spoke to Jennifer Lawrence for ELLE in 2018 about her hope to become a mother in her 30s. “My perspective about kids has changed as I’ve gotten older,” she told her friend. “I never babysat or anything. As a teenager, I was like, I’m never getting married, I’m never having kids. And then I got older and I was like, I really want to get married, I really want to have kids.”

Weeks into parenting, Stone and McCary are “excited” and have built a “strong and respectful” relationship.

“They are a very grounded and private couple and were ready for a family,” a source close to Stone told the outlet in late March. “Emma is close to her family and good friends but not the type to flaunt her personal life. Dave respects that about her and is the same way. They have a great life together and support each other.”

An insider added that “she has been private [about life with Dave and their baby girl] but said that she was feeling great. She always has a huge smile when she is with Dave.”

A third film source reiterated what People‘s first two sources said about McCary and Stone’s relationship: “Emma and Dave have a strong and respectful marriage. A baby will add a new dimension of bliss for both of them.”

In April 2021, just one month into parenthood, McCary and Stone’s relationship had changed drastically.

Us Weekly got a rare update from a source about how McCary and Stone are doing one month into becoming parents to their baby girl. “Having a baby has brought them closer in a way they never expected,” a source told the outlet. McCary in particular is “hands-on and helping with their daughter.”

The couple has been “very low-key and has asked people to just respect their privacy during this time,” the source added. “Emma has been at home with her husband and the baby.”

The couple reportedly lived together while dating.

On the heels of their engagement news, a source told People that McCary and Stone also “got a home together in Malibu over the summer.” The insider went on to talk about the couple’s connection, sharing, “Dave is a super down-to-earth guy. Most of his best friends are people he’s known since he was a kid, and he’s not affected by Hollywood. He’s very creative and funny, and he and Emma share the same sense of adventure.”

Stone first met McCary when she hosted SNL in December 2016. She was performing in the show’s “Wells for Boys” sketch, which McCary was directing.

Houston, we have a side hustle. In addition to his work on Saturday Night Live, McCary directed a film called Brigsby Bear, starring his SNL pal Kyle Mooney. The film released (only in select theaters) in July 2017, and grossed $500k at the box office. Before the film’s opening night, Stone and McCary were rumored to be dating but hadn’t actually been seen together—until the film’s opening night that is. A fan caught this video of the couple leaving the film’s premiere party together (that blonde head is Stone and that abnormally tall guy is McCary). 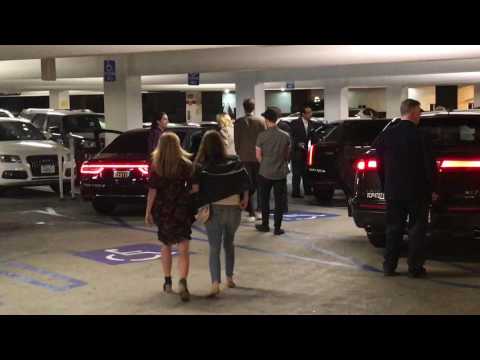 He’s been dating Stone since at least October 2017.

Rumors that Stone and McCary were exclusive were swirling since they were seen leaving that Brigsby Bear premiere together, but actual, legitimate reports they’d been dating “for months” surfaced in October.

Unlike his famous girlfriend, McCary has an active Instagram account…sort of. He’s on Instagram as @DaveMcCary, but he’s posted hardly any photos of himself. In fact, his feed consists mostly of photos of his best friend Kyle Mooney, who is an actor on SNL.

On June 22, McCary and Stone were spotted on a rare date night out as they attended a San Diego Padres baseball game. The couple wore Padres fan gear and posed for quick selfie with sports analyst Mark Grant. “Great to meet Academy Award-winning Best Actress Emma Stone and her husband Dave McCary from Saturday Night Live. I mentioned I have done a few films myself 😂 #Dontourage @Padres,” Grant tweeted. This is the first time the private couple has been spotted out together in over a year.

Then on Friday, October 7, they caught the San Diego Padres in game one of their National League Wild Card series at New York’s Citi Field. The couple was adorably dressed in gear from the Padres brand store. The mega-fans were laughing and having a great time while wildly cheering on their team, who eventually won the first of the best of three series 7 to 1.

He and Stone are working as film producers together.

On January 20, Stone and McCary made a rare appearance during a Zoom panel for the 2022 Sundance Film Festival to promote the release of the film they produced together, When You Finish Saving the World, directed by Jesse Eisenberg. Their production company Fruit Tree Productions was founded in August of 2020.

“As an actor, you usually just go with what comes to you and you’re at the mercy of the process,” Stone said, according to IndieWire. “We don’t want to say we just want to make things, that sounds trite. Because we have these longstanding relationships, we thought it would be amazing to support these people in a more meaningful way than just being a cog.”

Holly Rhue is a writer and editor in New York City.

Savannah Walsh is an Editorial Fellow at ELLE.com.

The Complete Timeline of Gigi Hadid and Leonardo DiCaprio’s Relationship

18 Cardigan Outfits to Try This Season

Listen To This: The Loudest In The Room!

This Biomarker Can Foreshadow Early Alzheimer’s Years Before